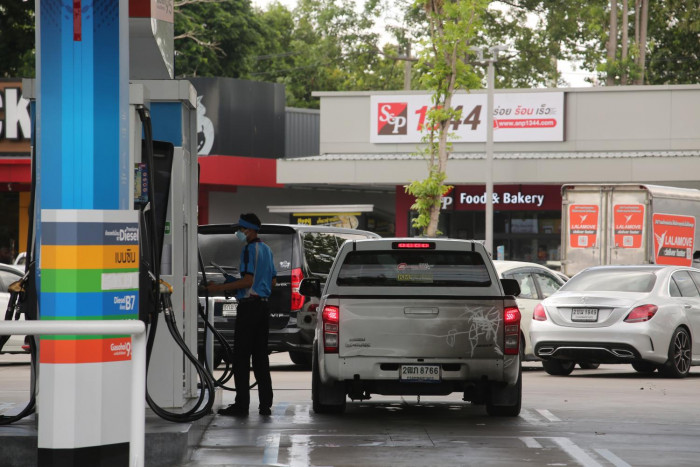 A pickup truck refuels at a PTT station in Bangkok. The government recently decided to reduce the excise tax on diesel by 5 baht per liter from May 21 to July 20. Pornprom Satrabhaya

The Oil Fuel Fund has enough credibility for financial institutions to lend to it to increase liquidity, allowing it to subsidize the domestic price of oil, Deputy Permanent Secretary for Finance Theeraj Athanavanich said.

However, financial institutions still need to consider the debt-service capacity of the fund before lending, he said.

The fund is in talks with state-owned banks for loans worth 30-40 billion baht, Mr Theeraj said.

Earlier, he said those talks should be concluded this month.

The fund is a key mechanism for stabilizing the domestic oil price and would not borrow under normal circumstances, Theeraj said.

When considering loans for the fund, financial institutions cannot apply the same criteria as when lending to normal businesses, he said.

As of May 15, the fund was in the red by 72 billion baht due to rising global oil prices.

It needs more capital to boost its liquidity in case the price of oil rises further, Mr Theeraj said.

He said that it is possible that financial institutions will lend to the fund for a period of 3 to 5 years.

Lending uncertainty centers on global oil price volatility, as it is impossible to predict how long prices will remain high, Theeraj said.

The Ministry of Finance expects the price to stay between $80 and $90 a barrel in the long term, he said.

The government recently decided to reduce the excise tax on diesel by 5 baht per liter from May 21 to July 20.

Part of the five-baht cut is intended to subsidize the Oil Fuel Fund, with the rest used to help cap the price of diesel, said a ministry source who requested anonymity.