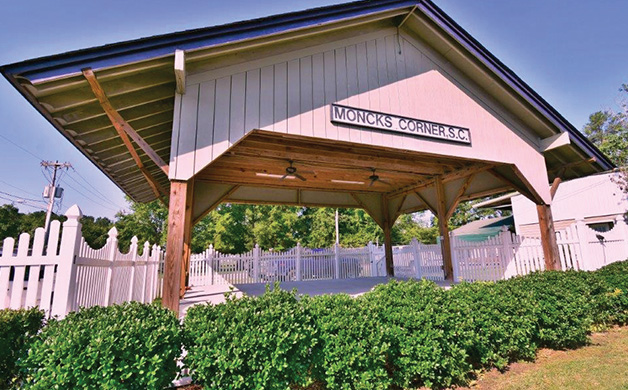 Moncks Corner, called “The Lowcountry’s Hometown”, is a place of contrasts.

One end of the community is home to Cypress Gardens, with its lush greenery, murky black water swamp, and dozens of alligators slithering into the dark waters.

At the other end is Mepkin Abbey, once a large plantation shaded by mossy oaks, then the South Carolina residence of Time magazine founder Henry Luce. It is now the base of a group of Trappist monks of the World Order of Cistercians of the Strict Observance.

In between is a quaint town center anchored by a century-old train depot and a modern park with a fountain and bronze sculptures of playing children. Small shops and restaurants line the thoroughfare of Main Street, next to Barron’s Department Store, a clothing store that opened in 1923.

The railway depot, built at the turn of the 20th century and renovated in 2000, began as a place where farmers and loggers could ship their produce to the market. As rail transportation declined in the mid-twentieth century, the depot was used less and less. It closed in 1975.

21 years ago, the depot was reopened as the city’s visitor and cultural center.

Moncks Corner has seen tremendous growth in recent years, said Douglas Polen, the city’s director of community development. Census figures for 2020 are expected to reflect an increase of around 60% in the population since 2010, from 8,000 to around 13,000.

“The growth is amazing,” Polen said with a laugh. “I’ve worked in many cities and it’s fun to be a planner and director of economic development in a city where you can really see change happening. It’s not just about wishing you had things. It’s all about, people call you up and say, “I want to build this here,” and a year later it’s there.

With growth, however, comes the need to develop responsibly, Polen said, to attract businesses that will benefit the region without sacrificing the hometown vibe.

A city with a colorful history

The seat of Berkeley County, Moncks Corner has a long history, beginning in the early 1700s when it was founded by landowner Thomas Monck, who opened a general store at a busy intersection.

Soon residents and travelers began to refer to the area as Moncks Corner.

While the city itself gains a more contemporary flavor, history is the calling card for two of Moncks Corner’s most popular attractions, both of which functioned as plantations in the 18th century.

Cypress Gardens, like so many places in the Lowcountry, is dripping with atmosphere, an ambiance that has been put to good use in films such as “Cold Mountain” and “The Notebook”. An early spring stroll along the 3.5 miles of trails and trails reveals an explosion of color, with tulip trees, azaleas and ferns, as well as a symphony of birdsong.

On the other side of the path is the swamp, with tall cypress trees towering skyward and cypress knees resembling stalagmites rising from the earth in gnarled, sometimes animal forms.

The flat-bottomed boat tours of the marsh provide insight into the history, as well as the flora and fauna of the region. Alligators sunbathe on small tongues of land in the swamp, and their main food source, yellow-bellied turtles, can also be spotted as boats glide through. The bird population includes ospreys and bald eagles.

The 80-acre swamp has around 200 alligators as residents, but since there are no fences or other barriers, the reptiles come and go as they please.

You might also spot an alligator basking on the banks of the Cooper River at Mepkin Abbey. During the Covid-19 shutdown, the church and other buildings at Mepkin Abbey have been closed to visitors, but tours of the grounds and gardens are led twice a week by docents who share stories about the history of the area and the property itself.

Time magazine founder Henry Luce and his wife, writer and politician Clare Boothe Luce purchased the property, located on a peninsula, in the 1930s, turning it into a fall and winter recreation area.

The terraced gardens, with sprawling oaks, azaleas and delicate lilies of the valley, are named after the Luces, who are buried there. The couple donated the land to the monastery in 1949.

About 20 monks currently reside at Mepkin Abbey, and they support themselves by growing shiitakes and oyster mushrooms for sale to restaurants and supermarkets.

Growth spurt in the Lowcountry

“What we’re trying to be is that alternative home. You have Goose Creek, Summerville, Hanahan, us. And to some extent our residential growth is driven by the cost of living. We are a little cheaper. But we also present ourselves as a more welcoming and friendly place, ”he said.

The larger population enabled the city to attract popular businesses. For example, Moncks Corner is getting a Popeyes chicken restaurant, which probably wouldn’t have happened a few years ago before the population boom, Polen said.

Despite the influx of new residents from across the country, there is still a strong bond between the residents of Moncks Corner, said Rachel Knight, director of tourism for Berkeley County.

“It’s a very close-knit community,” Knight said. “Every holiday is celebrated with a festival or a parade. “

Throughout the Covid-19 pandemic, the municipality of Moncks Corner did not impose the wearing of masks.

The pandemic has brought unique challenges to seemingly every community, and Moncks Corner was no different.

Some things had to be adjusted, but “I don’t think we’ve lost any businesses to Covid,” said Molly Willard, director of Corner Renaissance, the Moncks Corner redevelopment association.

And now, with vaccinations in full swing, “everyone seems to be afloat,” Willard said.

“There were months they couldn’t be opened,” in late spring and early summer 2020, “but once they were cleared to reopen, I think some of them they definitely saw fewer people, ”he said.

As the world reopens, Moncks Corner is expanding its list of events. The city launched a weekly outdoor entertainment event that kicked off in late April. Finally, Friday, which will run until late fall, will feature live music and activities for children.