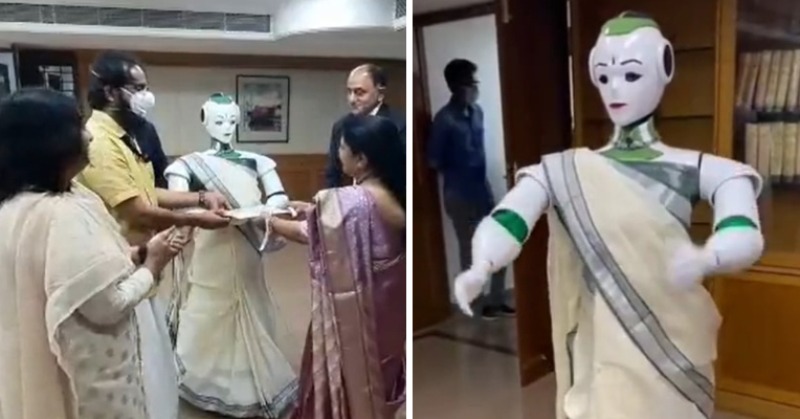 For any business, getting the loan sanctioned by a bank is in itself a feat. So when a Kerala-based start-up got the green light to receive financial assistance, they knew how to make the occasion memorable and unique.

The cutting-edge robotics maker wanted to get the most out of its technology and what better way to remind the bank what it made the loan for. The company, fully exposing its innovation, arranged for the robot to receive the documents on its behalf.

Now, a video making the rounds of the internet that shows the robot retrieving papers from officials.

The now-viral video was posted by a Twitter user with the caption, “Federal Bank, Kochi Branch, sanctioned loan to robot manufacturing company. Company staff brought in robot to receive sanction letter from ready.

Dressed in a traditional sari, the robot thanked bank officials in Kochi. “It is such a great privilege to receive the financial assistance…on behalf of Asimov Robotics. With this, the Federal Bank has proven once again that it will always be there to support the development of indigenous technologies” , said SAYABOT.

Not only that, he also wished everyone a “Happy Onam”.

The video ends with the robot finishing his speech and a female bank official handing him the official financial aid paperwork.

In response to the Tweet, ASIMOV Robotics Founder and CEO Jayakrishnan T shared a video of SAYABOT singing a traditional Kerala boat song.

The Kerala-based start-up, in all likelihood, takes its name from the famous science fiction writer Issac Asimov. The Russian-born American writer was known for his work to create an ethical system for humans and robots.

Robotics is booming in India and companies in the field have gone on a funding spree.

The transformation and rapid progress of the robotics industry in India is a refreshing development in the technology landscape.

When it comes to the future of robotics in India, the picture looks bright and full of potential. Since India has a solid computing base, it can provide the fuel needed to propel the robotics industry. It is necessary to take advantage of its advantages in order to be a net exporter of robots in the near future.