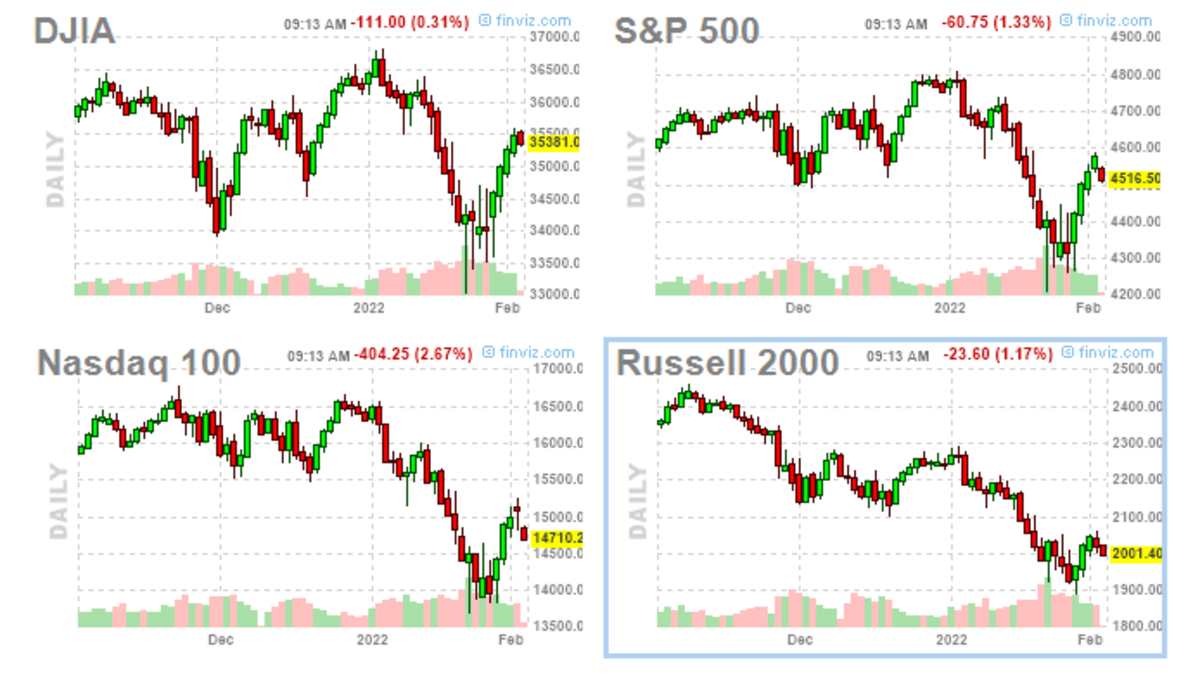 This is where you have a fish that is still alive on the deck of your boat gasping and collapsing – but will soon be dead. It is not the same as a seesaw – in which the markets reverse direction. It’s not that, it’s more like bouncing back because death is quickly creeping up on them and they’re trying to escape. Get the picture?

Amazon (AMZN) made strong profits yesterday and the Nasdaq is up 116.25 pre-market but overall it’s really nothing and that’s why we have our Bounce Chart – this reminds us of the true scale of the destruction. We should probably have one for global warming so people stop thinking the problem is solved every time we have a snowstorm. For our indexes, we have:

This was our strongest rebound chart and we are just one bad turn in the unreliable Dow to fall back into our weaker chart, which would indicate that we are likely on track to revisit our recent market lows. (and more likely to exceed them) in February – that’s what we expected after this stronger-than-expected round of rallies last week.

Nothing should be red on this chart if we recover. These are the rebounds of the PROJECTED lows – we haven’t even hit these lows yet, so failing the rebound lines of these lows is NOT BUENO! We thought the rally was BS as the dollar fell 2% last week and all the S&P did was rise 6.66% – not at all impressive when your currency is going up. collapses.

Of course now we are back near the low of the year and the dollar is harder to manipulate lower because that means you have to find a currency you can strengthen and neither Canada nor Great Britain Britain, neither Japan nor Europe are up to the task and the Chinese can’t flee their currency fast enough as this huge housing disaster is only moments away from hitting the fan (pushed back until the end of the New Year by the Party Committee).

China is heading for a massive hangover and Japan is just plain depressed as Europe battles massive inflation and anxiously awaits its own housing meltdown as rates rise – and so do we, but nobody seems ready to face this reality even if, once again, MATH!!!

The average home in America is now $329,000, up more than 50% from $240,000 in our last crisis. Instead of letting house prices correct, our government bailed out the banks and provided low rate loans so that most people would have loans of 3% or less at this point and here is the math. So that’s $1,413/month to pay for that $300,000 house. The number one problem is that taxes are going up. If inflation is 7% and your city, like most, needs to balance its budget, taxes increase by 7%.

This means that without outside help, house prices will have to fall by 13% to match consumers’ ability to pay. In fact, Canada’s banking regulator is warning of drops of up to 20% in house prices in some of their overvalued markets. These markets often border the United States where the lack of a wall has allowed 300,000 people to migrate to the Great White North and has also driven up housing prices.

As you can see, the US, UK and Canada are all suffering from severe housing shortages and this is the kind of situation that takes years to correct. To add 60 homes per 100,000 people in the United States, we need to build 200,000 more homes per year than the 700,000 per year we have averaged over the past decade.

We’ll be adjusting our short-term portfolio a bit further down over the weekend during our live member chat – we’ll see how low the Nasdaq can go today. Even if we hit 14,100 next week – there should be a bounce off that line towards 14,400 – where we are now – so not a crisis but, just in case – better safe than sorry! Non-farm payrolls were stronger than expected with 467,000 jobs added in January, but hourly earnings rose 0.7%, nearly double what was expected, as employees are forced to pay more plus for their work and that’s exactly what the Fed is. try to prevent.

Moreover, unemployment has not budged – still at 4%. None of this is stopping the Fed from reining in the economy.

Have a good week-end,