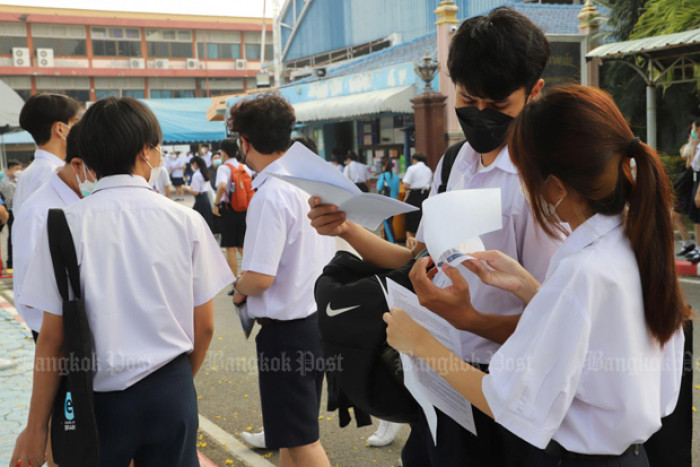 Few sectors have escaped the devastation caused by Covid-19 and private education is no exception.

Two years of the pandemic have been so difficult for some private educational institutions that they feel like they are on their last legs. They say online courses were at the heart of the problem.

The crisis began when the Ministry of Education ordered schools across the country to push back the reopening of the new school term when the pandemic hit.

Parents did not know when their children could return to school. When it became clear that the virus would linger longer than anyone had thought, classes had to resume remotely.

Although online classes have started, some parents were paying only partial tuition or none at all. They argued that schools used fewer resources to run online classes and therefore should not charge the full fee.

At the same time, many parents themselves were feeling the financial pinch after being laid off or furloughed.

the Bangkok Post spoke to private institutions, including international schools and universities, to explore this phenomenon further, following the Office of the Ombudsman’s discovery that many private schools had cash flow problems during the pandemic and asked the Prime Minister Prayut Chan-o-cha to intervene.

Parents, schools in the same boat

Despite the return of some on-site learning in the second term, some parents were still reimbursing unpaid fees from the first term.

Ms Padiwaradda said the school recommended that parents pay the full tuition and associated fees first, with the promise that the school would later refund any unused portion of their payments.

Reimbursements were scheduled for November last year for expenses including swimming and computer lessons which had been suspended during the Covid-19 outbreak.

Private schools had less revenue and struggled to balance their books as they had to deal with fixed costs, such as the salaries of teachers, teaching assistants and cooks.

“Our expenses remained the same. But parents wondered why they should pay the same fees when their children were not attending classes on site,” she said.

For example, the cost of student meals at school also covers cooks in the canteen. The school must now absorb the expense.

Schools that can afford it have dipped into their financial reserves to meet the fixed costs. However, there remains the question of unpaid fees.

Ms Padiwaradda said that at her school, 30-40% of tuition fees remain unpaid since the first term of last year. The figure rose to 50% in the second term.

“We understand what our parents are going through. We suggested that they take care of specific overdue payments, such as swimming lessons or computer lessons.

“Some parents have faced pay cuts at work or been laid off. We’re in this together,” she said.

The school has also asked parents to understand its current situation, including the fact that teachers’ salaries alone amount to more than 1 million baht per month.

While parents received a one-time corrective payment of 2,000 baht from the government during the pandemic, private schools received no financial assistance.

Private schools can still tap into the government’s education support fund or school milk fund. However, they are prohibited from spending the fund on operating costs such as teacher salaries.

The school principal said it would make a big difference for private schools if the government allowed the support fund to be used for causes that can sustain them during this time.

She said arrangements could be made for the government to subsidize half of teachers’ salaries and provide the subsidy directly to teachers.

Large schools are better able to survive the financial crisis. It is the small schools that are at risk of closing.

Schools that cannot remain floating must notify authorities of their plan to liquidate at least a year in advance to allow parents time to find new schools for their children.

Ms Padiwaradda said around 10% of small private schools with no more than 100 pupils were at risk of closing due to the pandemic.

“It’s a tough environment there,” she said. She hoped for better during the new school term which begins in May. It is now summer vacation for schools.

“Everything should be back to normal next school term, provided there is no new variant of Covid-19,” Ms Padiwaradda said.

Universities need to reinvent themselves

Universities have also encountered a similar problem: parents are taking longer to pay for their children’s tuition.

Many universities have student aid programs in place, even at their own expense. Private universities are in various states of financial difficulties and three or four of them are in the process of being taken over or closing down permanently, with the pandemic being the final nail in the coffin, says Pornchai Mongkhonvanit, rector of the University of Siam and President of the Association of Private Higher Education Institutions of Thailand (APHEIT).

Private universities with strong finances are better able to weather the pandemic storm. Those with no money to fall back on are in a struggle, especially when there is a lack of state funding for private universities.

Many were small and medium enterprises that opened lucrative institutes of higher learning. Now that the pandemic has plunged them into the red, they are turning to the association for help. However, the association has many universities under its wing that it has to take care of.

Mr Pornchai said higher education institutions need to reinvent themselves to remain relevant in the longer term. They should combine disciplines to meet academic and workforce needs in emerging fields such as the fusion of science and public health.

“Private universities are keeping their noses above water,” he said, noting that their survival could also hinge on creating a niche by creating specialized study tracks.

He added that government financial aid could come with strings attached, which could undermine their flexibility and independence.

There has been state aid to private universities although it has been small in quantity compared to that given to state universities. Aid has mainly taken the form of research and training.

The pandemic has also forced international schools to tighten their belts and find ways to help parents cope with various constraints.

Schools have offered to reimburse the expenses of suspended activities to parents who also have the option of paying school fees in installments or over an extended period.

ISB has not raised tuition fees for the past two years and parents are still paying the fees. The 174 international schools under ISAT are among those that are not eligible for state subsidies or financial aid.

She called on the government to consider allowing foreign investment in schools and increasing the number of foreign students.

Meanwhile, Deputy Education Minister Kanokwan Vilawan said private schools in financial difficulty can each get a loan of up to three million baht from the private school fund.

The fund is, however, restricted to certain private schools, such as international schools, which are not eligible to receive state grant or support.

The loan comes with a low interest rate of 2% per annum, which has been paid to 465 schools affected by the pandemic. Those who borrowed before the pandemic at 4% per year also saw interest reduced to 2%.

Teachers who took out loans from the private schools welfare fund were granted some reprieve after interest was lowered from 4.5% a year to 4%.

In addition, regulations will be revised to allow small private schools with fewer than 120 students to apply for a loan from the fund. Ms Kanokwan said she planned to ask the cabinet to inject more money into the fund, which has just 200 million baht left in its coffers.

Commercial banks approached by several pandemic-affected schools seeking loans were reluctant to extend credit to them given the difficult economic situation.

“That’s where the fund comes in,” the deputy minister said, adding that some parents facing declining incomes have opted to move their children from private to public schools.