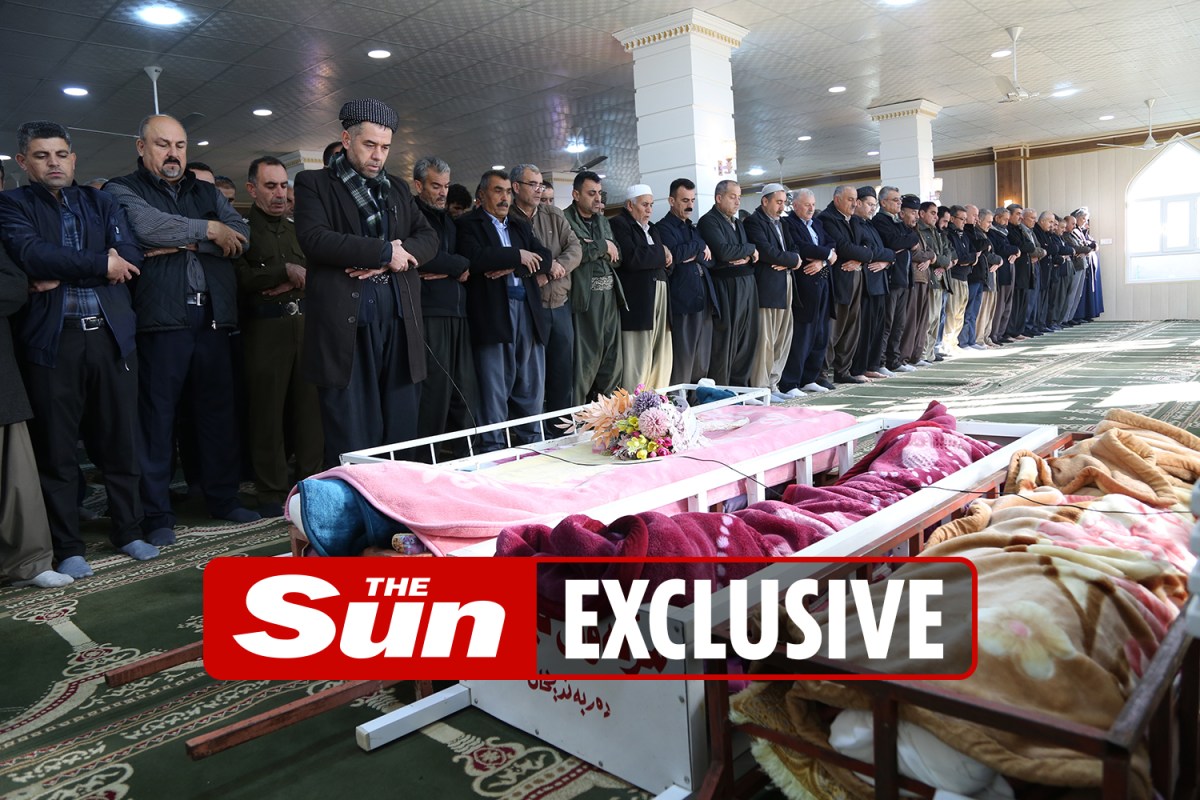 Every father wants a good life for his children

THEY dreamed of returning home with stories of a new life in Britain, but instead came shrouded in shrouds.

High in the mountains of Kurdistan, mum Khazal Hussein and children Hadiya, 22, Mubin, 16, and Hasty, seven, were buried on Boxing Day after perishing in the English Channel.

They were four victims in a perilous human cargo operation that claimed the lives of 44 people last year, but continues to attract the desperate and the brave en masse.

Heartbroken husband and father Rzgar Hussein, 58, told The Sun: “I feel like I’m done with my life.”

The policeman, who had sold the family home and taken out loans to finance the £ 32,000 cost of their trip, added in tears: ‘They didn’t see a future here. Every father wants a good life for his children.

“That’s why I let them go. I sold my house to send them to the UK.

This dream ended when her loved ones trod the water in the icy English Channel, desperately trying to keep their heads above the waves.

Their dinghy deflated, its engine stalled and Khazal clung with his children to his remains along with about thirty other migrants.

As hypothermia and exhaustion set in, Mubin made SOS calls to UK and French authorities, struggling to keep his phone above water.

A confident and articulate teenager, I discovered a week earlier that his English was up to par.

Met in the midst of the misery of the Grande-Synthe camp near Dunkirk, France, Mubin acted as a translator for his family.

Khazal, 46, a smiling and welcoming woman, said through Mubin: “All we want is a life.

I met them on November 17 when they were pitching their tent in a swampy field with no running water or sanitation after a police raid.

Wrapped in scarves and wearing woolen hats, they looked hopeful despite the appalling conditions.

They were happy to chat and pose for photos, Mubin and Hadiya eager to test their English as they scooped up a few meager blankets, pots and food from an old caddy.

They had left the remote town of Darbandikhan, home to 45,500 people, in the Iraqi Kurdistan region, to join relatives in Birmingham.

Traveling by boat from Turkey to Italy, they reached the camp in November.

We are very afraid of the boat trip. It’s so dangerous on the boats, but we have to go.

Chatty Mubin wanted to be a barber.

He said: “We are afraid of the boat trip. It’s so dangerous on the boats but we have to go.

Big sister Hadiya, 22, an art student, told me she wanted to be an actress, adding, “In Iraq we don’t have any money. We just want a good life.

Little Hasty, dressed in a pink kitten hat and winter overalls, laughed as she played like she was camping.

I took a photo on my phone as it rocked on the ropes of the family tent.

Radiant, she was oblivious to the dangers that awaited her.

Kazhal accompanied the children to finish setting up the tent as night fell and the temperature dropped.

After our interview, I went to a nearby supermarket and bought them bread, snacks, chocolate and water.

I shared a joke with Mubin after he said he thought the weather would be better in Britain.

Then he spelled out the last name with a ballpoint pen on the back of my notepad.

Every father wants a good life for his children. That’s why I let them go. I sold my house to send them to the UK.

Saying goodbye I asked them to contact me after reaching UK.

Less than a week later, this charming young family set out for Britain, putting themselves in the hands of smugglers to cross one of the busiest sea routes in the world.

At nightfall on November 23, they joined around thirty other people in a pre-arranged bus for the ten-minute trip to Loon-Plage, on the coast between Dunkirk and Calais.

A 33-foot canoe with outboard motor for the group had been hidden by smugglers in the dunes.

At 8 pm, Hadiya texted Rzgar in Iraq: “Dad, in five minutes we’ll be leaving. Everyone is getting on the boat now. Dad, we’re going in.

The smugglers, skilled in avoiding the patrols, gave them the green light at 10 p.m.

The canoe, designed to hold no more than 20 people, launched into the rough waters.

At 10:50 pm, 18-year-old Pshtiwan Rasul Farka sent a voice message to the house: “How are you, my brother? Your brother and everyone with me, we are safe in the sea. We hope that we will arrive safe and sound and soon, God willing. “

But the overloaded boat made slow progress in what another group of migrants described that night as “big waves and stormy weather”.

When they reached the middle of the English Channel, the dinghy began to deflate and take on water.

The phones went down the drain and people started to die. Nobody came. We were in the sea for ten hours. I was exhausted.

Survivor Mohammed Shekha Ahmad, 21, later told Iraqi TV station Rudaw: “The right side of the boat was losing air. Some people were pumping air into it and others would scoop the water out of the boat.

Mubin and another passenger made frantic SOS calls.

Mohammed, who wants to reach Britain so that he can pay for his sick sister’s medical care, added: “We called the French police and said, ‘Help us, our pump has stopped working’.

“Two people were calling. One called France and the other Great Britain.

The British police did not help us and the French police said: “You are in British waters, we cannot come”.

At 2:30 am, the boat was sinking. Mohammed says he is haunted by cries of “Please God save us!

Another survivor, Mohammed Isa Omar, 28, from Somalia, told Rudaw: “Most of the calls were to Britain for help.

They said, “Send us your position.” But we didn’t have time and the phones fell through and people started to die. Nobody came. We were in the sea for ten hours. I was exhausted. “

He is adamant the dinghy made it into British waters.

The last phone contact was a voicemail message from Shakar Ali Pirot sent at 3:42 a.m., telling the family that he was not sure who was coming to rescue them.

At 9 a.m., another migrant boat spotted bodies in the water and called French authorities.

One migrant said: “I have seen bodies without life jackets and others with but worst of all, very cheap bodies.

At 1:58 p.m., a French fishing boat spotted more than a dozen bodies and sounded the alarm.

Fisherman Karl Maquinghen, 37, said: “To see so many dead like that next to us was like a horror movie.”

He said many life jackets were not properly fastened.

At least 30 people have died, the highest number of dead in the Channel since the start of the crossings in the dinghy.

France has denied receiving distress calls from the boat.

But Le Monde newspaper said telephone records of survivors supported claims the French and British had been contacted.

Nations are generally responsible for rescues in their own waters.

The Maritime & Coastguard Agency told The Sun an investigation was underway, adding that on the day of the tragedy it had received more than 90 alerts, including 999 calls, from the English Channel.

A spokesperson said: “Every call has been answered, assessed and dealt with, including the timely deployment of search and rescue resources.

“There is no circumstance in which we would ask a caller to call the French authorities on our behalf.”

Legal proceedings have been launched against the British and French authorities, while relatives are calling for an independent public inquiry.

Rzgar said he expected a better future for his children.

Instead, he buried them – young lives wasted amid political failures and criminal greed.

Small business loan approval rates continue to rise, but at a slow pace