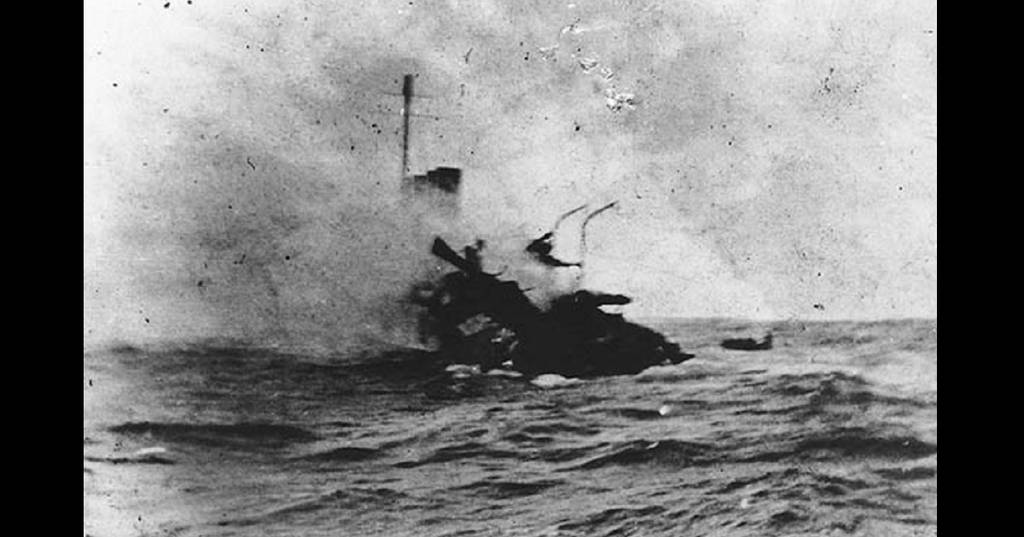 The wreck of the USS Jacob Jones, a Tucker-class destroyer and the first ship of its type to be sunk by enemy fire, was recently discovered off the southwest coast of England by a group of British diving experts.

The World War I destroyer was hit on Dec. 6, 1917, by a German torpedo, killing 64 of the 110 officers and crew aboard, according to the Naval History and Heritage Command.

More than 100 years later, a group of UK diving experts discovered the wreckage of the ship around 400 feet under water and about 60 miles south of Newlyn, England, according to a Facebook post. of August 11 from Steve Mortimer, one of the divers and the group. research leader.

“We found the Jacob Jones, the first American destroyer to be sunk, and the first major casualty of the United States Navy in World War I. It’s an incredible feat,” said Will Schwarz, 39, another of the divers, in an interview with Military Times.

The historic discovery was led by expeditionary diver Mark Dixon on his boat the Darkstar, with the help of a team of independent dive groups and individuals, some with commercial dive club experience, Schwarz said. Months of planning and training went into the trip before it happened, he shared, but this type of mission was nothing new to him or other team members who recently found the lost HMS Jason off the coast of Scotland.

The story of the Jacob Jones’ ultimate descent into the depths of the ocean is a dramatic tale that paints an intriguing picture of World War I warfare, and her discovery is just the latest in a series of remarkable naval discoveries.

En route from France to Ireland, the Jacob Jones was torpedoed on her starboard side and sank in about eight minutes about 20 miles east of Start Point, England, according to the NHHC. She had carried out salvage operations in Europe throughout 1917. As her stern sank, Commander David Bagley reportedly ordered the ship abandoned. The officer on deck when the incident happened, Lt. Stanton Kalk, sacrificed his life to help his men out of the water and evenly distribute them into life rafts, according to the NHHC.

In an interesting turn of events, however, the German captain of U-53 which had attacked the Jacob Jones radioed the nearby American base at Queenstown to let them know they had sailors at sea who needed to be rescued. Rescue operations were carried out by British warships.

“They could have been enemies, but everyone recognizes it, the sea is a horrible mistress,” Schwarz said.

After making the discovery, Schwarz said he and the team didn’t disturb the site at all and only shared its exact coordinates with the US military, who will ultimately decide what happens to them. remains of the Jacob Jones.

“As a general rule, we prefer Navy wreck sites to be preserved,” Admiral Samuel Cox, director of Naval History and Heritage Command and curator of the Navy, said in an interview with Military. Times. Cox has worked as command director for nearly eight years now after serving more than 30 years as a naval intelligence officer.

He said it is conceivable that a dive team could bring the ship’s bell for safekeeping at the National Museum of the United States Navy, as it is common to commemorate a ship’s legacy, but said stated that in general, honoring the war grave as a sacred place means causing the least amount of damage to the ship.

Locating the wreck of the USS Jacob Jones has been the latest achievement for naval historians after a series of other major discoveries surfaced recently.

The USS Samuel B. Roberts, a John C. Butler-class destroyer escort, was found earlier this summer off the Philippines at nearly 23,000 feet below sea level, the deepest wreckage deep never located according to the explorers. This discovery followed the discovery of the USS Johnston in 2021, which was previously considered the deepest wreck.

Director Cox cited “modern technology that did not exist” before as an explanation for the growing trend of discoveries. He noted some of the other missing warships he hopes will be discovered in the future, including the Independence-class aircraft carrier Princeton, the Casablanca-class escort carrier Liscome Bay and the class destroyer Bagley Jarvis.

Whether it’s these ships or others, Schwarz and company are already planning their next big adventure.

“Next year we already have major plans in British Isles waters to find and identify three more wrecks,” he said.