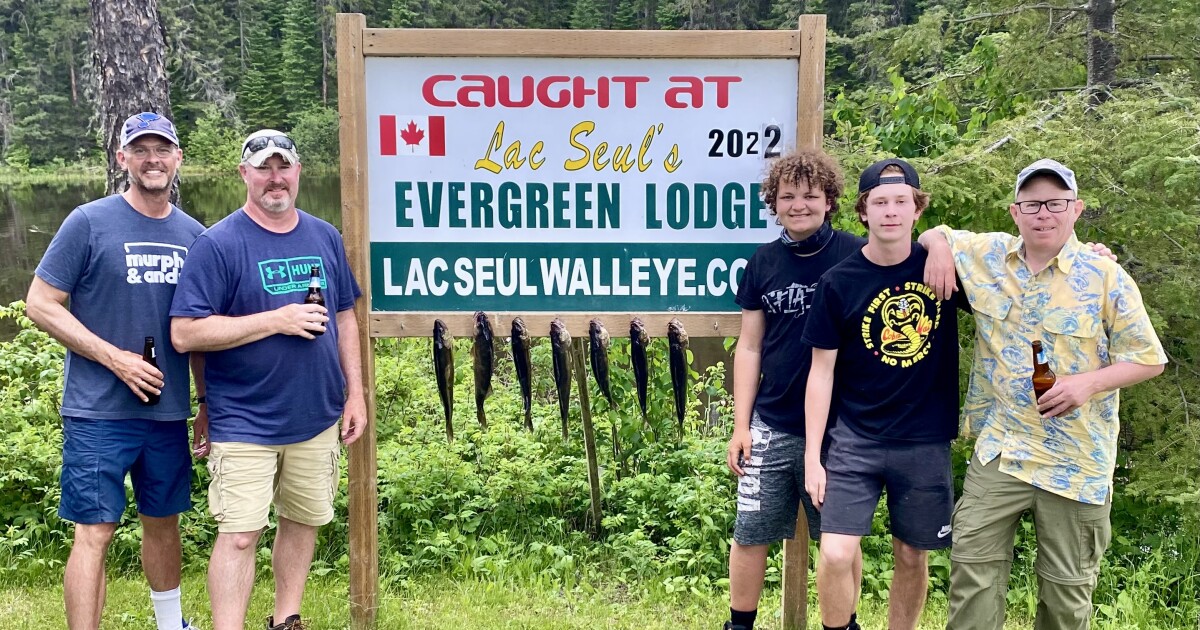 The feeling is hard to pin down when Lake Seul Evergreen Lodge comes into full view. The late afternoon sun paints the rustic cabins in shades of red and gold, while the tea-coloured water laps lazily along the docks.

Things slow down on the porch of this Canadian wilderness. The cities, as well as the constraints, are left far and fortunately behind. Traffic jams come in the form of morning boaters scrambling to find solitude and catch limits in a walleye paradise.

The northwest corner of a stream spanning 150 miles, roughly the distance from San Diego to Santa Clarita, offers something valuable and profound during our lingering pandemic days.

In a world seemingly built for social distancing, COVID worries are fading. In a place where cellphone reception fades, so does social media bickering.

Andy Fales, a friend who is a TV news anchor and sports radio host in my old town of Des Moines, Iowa, framed the power of loose shoulders and fogless thoughts.

“The newscasts we’ve been doing, for over two years, we’ve had a COVID story in every news block,” said Fales, who along with Ken Pink joined me on the first trip to the lodge in 2015. “Sometimes that’s all it was. (At Lac Seul), it wasn’t really brought up. It was like, poof, it was gone.

“It is the true mark of a good vacation, letting go of the troubles of your daily life.”

This place is an outdoor buffet for the senses. There’s the gory thrill of line ripping from a reel. Bears and moose patrol the winding shoreline. The showers release the intoxicating smell of jack pines. The taste of fresh walleye fully earns it the nickname Canadian caviar.

It amplified the incalculable value of a return to a lodge where the owners, Kathie Taylor and Brent Williamson, became friends.

They have survived the economic ravages of virus-fueled border closures while operating a business where 95% of customers are American. They found a way to hold things together with a newborn son named Ben. For two long, quiet summers, they settled into a makeshift hotel for mining contractors.

“We had Ben to distract us and we were able to hang out with him,” Taylor said. “Some people were like, maybe you should have gotten a job at the factory. But you couldn’t earn enough to cover the expenses of this place. Luckily we had some savings.

Lucky for us. The cherished escape had been shelved for nearly three years as the world watched a terrible and deadly disease curb annual traditions and cherished rhythms of life.

The world has learned the depth of taking things for granted. The health and financial setbacks of others have taught us a painful prospect.

So returning to a place that breathes the spirit into your soul was a blissful feeling.

“I think that was the biggest thing, getting back to some kind of normality,” said Pink, who brought her son Wyatt on a second trip that marked a global health crisis. “When it first hit, we did the neighborhood thing outside in camp chairs, more than six feet apart. But it was not the same.

“To enjoy each other’s company again, with something you haven’t been able to do in three years, was amazing.

The fishing, without pressure for two full summers, has been spectacular. Catching walleye in the 20 to 23 inch range was far from uncommon. Northern pike, northern freshwater barracuda, eclipsed 10 pounds. Perch and smallmouth bass broaden the mix.

The spring melt collided with the rain to lift the lake about four feet. On the final morning, Fales and I anchored our boat in what would be a grassy, ​​nearly waterless spot in normal years.

Sitting in just 4 ½ feet of water, the catch rate of jigheads and minnows is staggering. From 7:45 in the morning until returning to camp in the late afternoon, we embarked about 250 fish.

The success became so crazy that Fales created a game called “reset”. If one of us made more than four casts with no fish, we would move the boat. If we caught one within the duration, the game would reset. More than three hours later, the boat remained on the spot.

In this stretch, the northerners hooked five times on smaller walleyes on the side of the boat. Suddenly you were shooting two fish as the tangled pair disappeared into the darkness.

The place, which could be gone forever by a summer, has earned the name Dead Minnow Narrows due to the ability to land fish no matter how bad the bait is.

Naming places on the map has become a travel ritual. There’s Bill Gray Bay, in reference to a former Des Moines councilman who schooled us one afternoon. There’s Cooney’s Cove, in homage to an Irish bar owner. The Brent Hotel was born thanks to a tip from Williamson.

Some locations, including a nondescript little island that regularly produced big numbers and was the site of a bald eagle making a necessary pit stop, remain laughingly unprintable.

Each bit of ink applied to the map of the lake, a memory preserved.

“You make it personal,” Pink said. “You make it your trip. It’s your lake. It’s at my house.

I first wrote about Lake Seul in 2017, when I invited a friend Jim Brown — the retired director of the San Diego City Lakes program — to experience the freshwater wonderland.

This time, fresh out of the pandemic’s harshest grip on a world forever changed, felt even more special and precious.

“These stories are part of your oral history,” Fales said. “Who knows how long these memories will last? Wyatt could bring his children and their children there. That’s how this stuff starts.

The six-acre lodge outside Ear Falls, Ontario is about a four-hour drive north of International Falls, Minnesota.

Will student loans be forgiven in North Carolina? Answer your FAQ