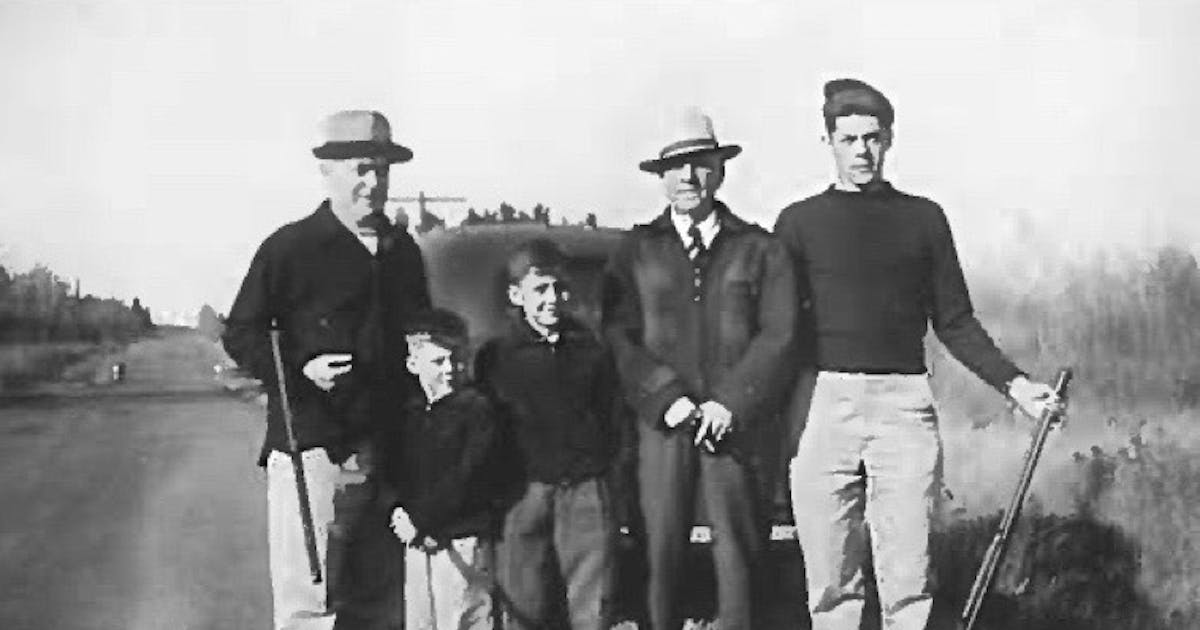 Early on Nov. 11, 1940 — 82 years ago on Friday — the dryland hurricane that would become known as the Armistice Day blizzard gathered near Kansas City and targeted the Mississippi River Valley.

Hundreds of waterfowl from Minnesota, Wisconsin and Iowa had set out at the start of the holiday — now called Veterans Day — in hopes that long skeins of mallards and webs would fly south to the rear of the impending burst.

When the skies finally cleared two days later, around 25 duck hunters were among the 154 people killed by the storm. Thousands of cattle also died in 20-foot snowdrifts and more than a million farmed turkeys perished.

Bud Grant, now 95, the retired Vikings coach, was barely a teenager in 1940 and is one of the few duck hunters alive today to survive the storm.

Attending Superior High School, Wis., Grant had friends who played football, basketball, and baseball with him. But he only had one friend, Bill Blank, who hunted, and on the weekends the two hiking trails around Superior carried their .22s and .410s, plinking grouse, squirrels and rabbits.

Grant and Blank had taken a break the day before the blizzard enveloped northwestern Wisconsin. An older friend, Phil Cross, had invited them to go duck hunting on Yellow Lake, about 60 miles south of the boys’ home in Superior. Often, at the end of the season, the pochards or blue bills frequented Yellow Lake and the three hunters were eager to shoot them.

“It was a different time and our equipment was poor,” Grant recalled the other day. . It was our hunting gear.”

Cross had rented a cabin on Yellow Lake with a wood stove. But Grant was too excited to sleep that night, and when well before dawn Cross lit kerosene lamps in the cabin to prepare breakfast, he and the two young hunters were soon out, rowing a hired boat on the lake.

As they did, the gathering morning light revealed an uneven sky. The winds were light and the rowing was easy. Adding to the hunters’ excitement, the wingbeats of as-yet-unknown ducks punctuated the otherwise calm morning.

Unbeknownst to the hunters as they rowed, a low pressure system over Iowa had deepened and would eventually produce the lowest readings on record at that time in Charles City, Iowa at 28, 92 inches, and in Duluth, 28.66 inches.

“We set up our decoys and shot ducks,” Grant said. “Then after a while Phil said he wanted to go back to the cabin for a nap. So Bill and I rowed him back. Then we rowed across the lake again to our decoys and continued to hunt.

At this time, waterfowlers on the Mississippi River near La Crosse, Wis., and Winona, Minnesota, and north and south of those towns might have sensed that the November winds they hoped would bring ducks on their decoys presaged not only a good shot but danger. Temperatures had been in the 40s and 50s that morning, and some hunters had climbed into their skiffs in shirt sleeves. Then the rains came, and the sleet. And soon after, snow and wind.

“Bill and I were shooting at some ducks,” Grant said, “when all of a sudden the wind picked up from the northwest and we were covered in ducks! The wind was blowing harder and harder. did, we shot more and more ducks. We couldn’t get some of them back because the waves were too big. Eventually, we thought we’d better get out of there.”

As Grant struggled with the boat’s oars, the wooden craft lurched and lurched and was finally thrown against the windward shore. Abandoning the boat, the two hunters entered water up to their shins and as quickly as the water rushed over the tops of their curly shoe covers.

They would circle the lake to reach the cabin, they decided, and they set off.

“We got halfway there, but it was swampy and Bill fell waist deep in water,” Grant said. “That and the wind and the snow got too much and eventually he said he couldn’t go anymore. There was a train line nearby and I tucked him in next to him and left him.

When Grant reached the cabin, he stumbled through the door and, half-frozen, told Cross where he had left Blank. Alarmed, Cross rushed into the whiteout as Grant, his clothes soaked, stripped down to his clothes and put on a pair of Cross’s waders while stoking the fire in the woodstove.

Half an hour later, Cross returned to the cabin with Blank. Once warmed up, the three hunters fled.

“We had no way of knowing if the storm was going to get worse or better, but we couldn’t stay in the cabin,” Grant said. “We didn’t have enough food or firewood.”

In Cross’ car, he and Blank and Grant slipped and skidded down the narrow road from the station to the highway. 35, the north-south route that would take them back to Superior.

Crawling at low speeds while scanning the maelstrom for the two-lane tarmac, the three hunters hadn’t come far when they rounded a bend to find two cars blocking the road, stuck in snowdrifts.

“We had no way to turn back and we didn’t know where we were,” Grant said. “There were two people in each of the cars. To save gas and stay warm, we all piled into one car, some of us sitting on the others’ laps. We were running the car by intermittently to warm us up, which we did for the rest of the day and night.’

Morning came and with it even deeper snow piled up around the cars. Grant does not remember how the decision was made. But perhaps because he was young and fit and also because he still wore Cross’ waders and could keep his feet dry, he was picked to go for help.

“Otherwise we were going to die there,” he said.

Tightening his canvas coat, hat and gloves, Grant got out of the car in the deep snow and headed north along what he thought was the road. Spruce, pines, and balsam flanked him, and he walked for an indeterminate time but probably for at least an hour before seeking shelter among the trees but finding none.

With his face covered in ice and snow, he trudged on and in time he came to a crossroads and in the northeast corner of the intersection was a gas station with two pumps. There were no lights on and no cars at the pumps. Still, Grant knocked on the door and a woman and her young daughter answered. The woman’s husband was away from the Superior shipyards where he worked, she said. But Grant could come in.

“There was heat and food and I was safe,” Grant said. “But there was no communication. My parents, I’m sure, feared that I was dead. I stayed with the woman and her daughter for two and a half days. During this time, Bill and Phil and the others had frozen to death, I was sure.

What Grant didn’t know was that not far from where the cars had gotten stuck, a farmer had shot a deer and hung it in his shed.

Worried that his family would need food during the storm, the same day Grant walked for help, the farmer walked through the snow to shoot the deer. As he did, he saw the cars stuck.

“The farmer took Bill, Phil and the others to his home, where they also stayed for two and a half days,” Grant said. “They ate all the deer during that time.”

Grant’s father, Harry Peter Grant Sr., was a senior firefighter, and when a plow finally headed south to clear the highway. On the 35th, he commandeered a fire truck to follow him. The plow, fire truck, Cross and Blank, and the others emerged after the storm at the two-pump gas station around the same time.

“Seeing me, my dad hugged me so tightly,” Grant said. “I had never seen my father cry before. But he cried and cried. He tried to pay the woman to feed me and keep me safe, but she wouldn’t accept the money.

“Later, when we got home, my dad sent her two $20 bills. My dad was making $100 a month, so it was a lot of money for him. But he wanted to pay her. The woman replied that with the $40 his family bought a turkey for Thanksgiving, having it instead of venison, which they’ve probably eaten all year.

After graduating from high school, Grant joined the Navy and Blank joined the Army. They remained friends, and when they were released, they pooled their $200 of money, took out a bank loan, and bought hunting land together in northwest Wisconsin.

“It wasn’t long before Bill wanted to get married and needed the money, so he asked me to buy him out,” Grant said. “So I took out another loan and paid it off.

“At the time, I was playing ball at the U and I paid off the loans by exchanging tickets to Gophers games.”

The housing market has a lot of renovations instead of moving out. These renovations can maximize your resale value